Virtual Hugs From Readers This Week

In one of those fluke amazing and cool things at the same time, this past week I heard from a reader off the blog who found one of my grandfather's coats in a thrift store in Greensboro and stumbled across my blog while doing research in the company he and my grandmother used to run. Even more amazing they reached out to me. This week, I got pictures and a note. A lot of people ask me why I sew or pattern make, and it's for notes and stories like this from customers. Hearing that a piece of clothing spoke to you. That we changed or improved your life for the better, giving you a hug from my hands to yours that though you may never see my face, but you will feel my hands. Helping bring joy, beauty, and laughter to your life. Even if we never meet in person, I still want you to feel my love. For life, for living, for being you. Because life is an amazing gift. And it's worth sharing with those around us. Especially the love and beauty of it. As anyone whose met me in person can attribute, I'm rather blunt and fairly introverted so this inner happiness does not translate over well. I often struggle to express my basic like of people in ways they can hear without being overwhelmed by too much stimulation. I think that's actually fairly common in the trades, but it makes me treasure the notes I get so much. Any I love seeing this coat being enjoyed years later from my grandfather's hands 25 years later. Knowing he would be smiling in his grave at the idea of having made a future customer he hadn't yet met warm would tickle him. So, this has been my virtual hug for the week. Have any good news to share?
Posted by Li Sashay at 7:41 PM No comments: 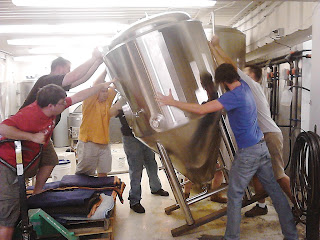 This week, I'm busy learning about the game of golf and something called the US Open. While I'm busy making samples, I thought you the reader might enjoy seeing some custom work from a bar remodel we just got done with. And it gives me a chance to show off Nash being all manly and such. Here's some pics of him and a bunch of other guys moving in the new fermenter! Whoot! So nice. Later this week, you get to see a custom sewing job I've been working on which finally turned out the way I was hoping. Have a great week my reader.
Posted by Li Sashay at 8:13 PM No comments: 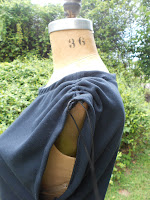 The phoenix hope, can wing her way through the desert skies,
and still defying fortune's spite; revive from ashes and rise.
- Miguel de Cervantes
$18.00 in Our Shop Now
Black S/M/L/XL

Ash left work excitedly that Friday. She'd gotten out of her dreary day-job late that day; her boss whittling away at her last nerve and causing her to sit in her cubicle while the doldrums of bureaucracy stack endless amounts of red tape and paperwork between her and a quaint Exit sign.

"I need a new job," she said to herself, hearing thunder in the distance and walking to her carpool.
"Or maybe just a fun night on the town! How 'bout it?" said a close girlfriend from the car window. "Come on, I got you a new outfit and there's a new bar downtown."

Getting in and strapping herself to the seat, she mused on the idea briefly, "It is supposed to rain tonight...that sounds like a good release!"
"Awesome," her friend said, peeling away into city traffic. "You can change back at my apartment and we can walk there. It's not far."
"Deal," Ash said, closing her eyes and enjoying the feel of not having to drive. 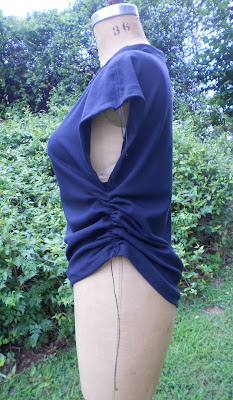 --
"Here we are, hun," said her friend, shutting off the car and opening the door.
Ash yawned out, "Must have dozed off."
"For sure, come on, lez go!" Her friend, always the energetic one, was all but pulling her out of the car to get her moving.
"Fine, fine," she yawned out again as she allowed herself to be led up to her friend's apartment and all but pushed into the bathroom with a bag of new clothes.
Charcoal wool tight-fitted jeans, with a loose black top that she could adjust however she wanted it to fit. Loose shoulders allowed for a lot of movement and showed off all her curves in all the right places. A set of leather cuffs complimented the outfit, she put one high on her arm and one around her wrist.
"You are going to burn down the house with how hot you are in that, Ash," her friend said, sneaking in.
"Damnit, you, don't do that!" Ash said, shooting a glare over her shoulder.
"Pfft, like that's ever going to work, let's go! Get your gray butt in gear, I want to watch it move!" her friend said, pinching her butt to get her moving.

The storm hit about halfway through their walk to the club. Neither of them were wearing white, and Ash's outfit fared better than her friend's. The water just made the clingy parts cling more and the loose parts didn't change much.
Fenix. The new club was built in the remains of a 1950's diner, and had been redesigned with a semi-Goth club in mind. The sign out front had its name in big neon letters and a phoenix rising from the ground. Perfect.
The bouncer took a few long, hard looks at the girls and let them in with a lingering stare at their backsides.
"Well, at least he thinks we're cute," her friend said, giddily.
The bass hit Ash as soon as she walked through the lobby. Something struck a tone within her and her spirit opened fully to the pulse of life on the dance floor. "Let's rock this town," she said a fire burning behind her eyes.
Like a Phoenix rising, Ash revived from her week and rode the thrills of the night.
___________________________________________________________________ 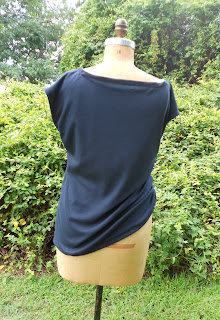 Hopefully everyone enjoyed that story from Nash to describe what he thinks of our fall ash shirt. Life is fun when our clothes work for us to make us look cool effortlessly.

This is a convertible design I've been working on for a while as a lot of my clothing has to be worn multiple places with multiple dress codes, and I don't have room in my purse to carry 8 different changes of clothes. This shirt does everything from slutty little LBD to artisty one shoulder number, respectable office shirt, and fun beach hide-a-way. I hope you like my solution to the problem. I've taken various shots here on the mannequin showing how easy it is to simply pull one side or the other, lengthening and shortening to suit your needs. You can find me wearing it all season or pick one up for yourself in the shop for a $18.00 in soft-knit jersey. Have a great week people.
Posted by Li Sashay at 2:42 PM No comments: 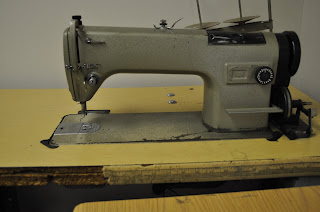 Hey guys, so Nash and I moving has given us both an excuse to clean up and sort through inventory. Certainly overdue. Most of the stuff we're keeping, but I do have a couple of things to list online for anyone in the area who needs it.

The first is a Consew 124, you've probably seen it in tons of posts over the years as it's an all around work-horse designed for military applications for everything from silk, to uniforms, to leather work. Pretty much every instructable, sample, or piece I've made has come off this machine or it's sister. Please feel free to check out the photos on Craigslist. Nash can deliver it in the area. We have two or I'd probably keep it because I'm pretty much addicted to the machine due to how easy to fix it is. Something you might not appreciate when first starting out, but you will be grateful for a year in. In working order and has been serviced in the past year so you should be good for a while. It is available for $550. 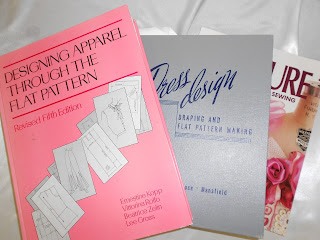 Next, spare design books. I have several design books that I have multiple copies of and am posting them for sale in the Etsy shop. Books on leather working, quilting, patternmaking, etc. These books are especially helpful as most of them include patterns (either full scale or 1/4) in oak tag or paper for easy use. One of the biggest stumbling blocks I find for new designers is sizing and scaling their drawings. Complimentary shipping on all books this month and most are $5.00-20.00! 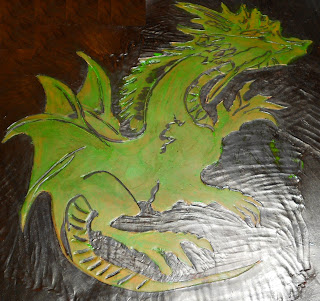 Alright, back from last week's leather armor costume, I (Dara) meant to post this earlier, but the real world is taking up a lot of time these days. I also put together a small tutorial for my girl friend Robin on Instructables for some leather hide work she was interested in doing for a Game of Thrones party. A birthday present of sorts.
You can see the dye here is beginning to take though I think it needs a couple more coats to really get the right shades as it's still a little too light in places. And some antiquing is necessary. Still, it's nice to have everything come together. Realized this week that the outfit I've been doing has over 80 separate carved dragons on it in 4 different sizes. Mmmm, major time investment. Oh well...totally worth it. :-)

So, today myself and a future supporter of the Maker Cave went out and started cleaning what's to be the design shop section of the Maker Cave. After rearranging and reorganizing, we found out that there's a lot more space than meets the eye! There's plenty of space for future equipment, entertainment and relaxing.

Thank you, Mike Hinman for lending a hand in getting the place looking nice. We also had fun futzing around with settings for camera phones. Mine didn't turn out as well as those from Mike's iPhone. Congratulations to Apple, that is likely the first and last compliment I will give them when compared to anything with a Linux OS.

This week will be packing and moving of my current workshop into the new location. I'm calling it Phase I of the move, because the final product will look nothing like what it will in its early stages. So far, the place is coming along to a great start.

The Maker Cave website is still getting edited and developed, but should be up sooner than later.

If anyone has any questions about this design space, please feel free to e-mail me. Especially if you want to lend a hand, donate funds, donate equipment, or even if you just want to offer support!

Thanks, everyone!
-Nash (The Cave Man)
Posted by Anonymous at 8:54 PM No comments: