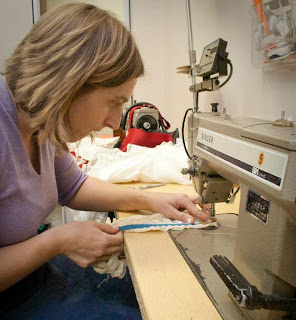 Hey everyone, I know this news is about 7 months overdue since the wedding was in October, but I am officially posting on the blog that my new e-mail address is now: DaraPage@lisashay.com. You will still be able to reach me at my old e-mail address: dsmcginn1@lisashay.com, but the website/facebook, etc. have been updated to reflect the changes. Yeah, married life paperwork. Also, Nash and I are switching out sales duties (He took over that position last year while I was doing wedding planning) to give him more free time in his new design shop (Affectionately called the "man cave".) which is only fair after a year of him doing it. I can't wait to see what fun and twisted metal and wood creations come out of this. 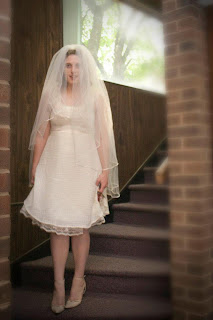 Have a great week everyone and may your life be full of joy and change. Also, today's photos are curtsy of my good friend, Mike Miller, who did the photography for our wedding.These are photos from my speed sewing session to throw together a last minute wedding dress in an hour and a half. I'm still a little amazed it all came together. While I've never been one for bridal as that niche was always filled by my grandfather and aunt when I came along, the experience has made me think some about adding it to my collection of custom services I offer one day. 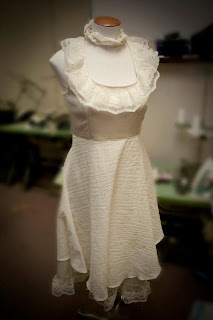 Mike's photos look so amazing, if you need a wow photographer, may I suggest him? His rates are reasonable and he's a lot of fun to be around. Plus, Nash and I just love him. Happy living today!

Sometimes you see something so awesome you just have to share it. These bags are one example. The most wicked thing I've seen to in a year for $60-80, these biker bags from Vaude Rucsacs are self-healing. That means if you're on the trail and you puncture them, they release plastic to self-repair on the spot like the human body...only much much faster.
I'm not much of a biker, but I love German technology. Personally I'm a big fan of leather or heavy weight cordura as I prefer my bags to be puncture resistant, over lighter-weight, but it's exciting to see different solutions to the same problem of making a durable bag. And the video is just awesome!
Happy Friday! May I have spread a little joy to your day!
Posted by Li Sashay at 7:41 PM No comments:

Hey guys, I keep getting requests for manufacturing short-runs and the theater is winding down for the summer which leaves some unexpected free time for my patternmaking/designer friends. It looks like Nash and I will have 2 CMT (Cut, Make, and Trim) slots per month for June, July, and August. These would be immediates with the standard 2-3 weeks standard turn around time for 100 piece runs min order size.
Typical turn around time is 5-10 business days after the first run (average 6 days). We can run mixed markers of up to 6 styles and 4 colors at once. This should be enough to create a salesman sample run for tradeshows/store/collection, etc. If you are interested or have some overflow contract sewing work you need done quickly, shoot me an e-mail with the type of work you want done, photos, piece rate, and estimated time frame. You must already have working patterns, samples, fabric, etc., this is just taking it to the next level and making money. 50% non-refundable deposit to get started, the balance is due COD. Thanks!
Posted by Li Sashay at 5:00 AM No comments:

Congradulations to Jenny Luper! You are the winner!

Yeah, you are now the proud owner for 4 tickets to go see the Bremen Town Musicians next month! Have a great time!
Posted by Li Sashay at 10:09 AM No comments:

The Importance of No

If you live long enough, knowledge comes back as wisdom. Or maybe the same story comes back twice if you don't hear it the first time. As a child, I loved the "Road Not Taken" by Robert Frost which is one of the most beautiful renderings of opportunity cost I've ever seen. 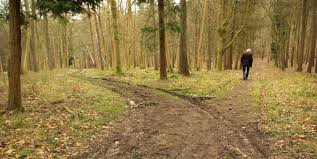 As an adult, I saw the grown-up version by a dying man on time management. Art tells the truth behind a lovely mask to keep people from realizing harsh realities, but me...I need the truth stripped away and laid bare for a 4 year old. Randy Pausch gave me the adult version. In life, we make time for the things that are important by saying no to things that are not. In business, this means turning down gigs that do not pay to make time for those which do. Because to stay in business,the number one rule is you must turn a profit each year.
Ironically this is way harder to do for artists I think than most because many designers design not just for money, but for love. And love will make you do CRAZY things. Most people in the trades privately admit to losing or giving away a certain number of designs or ideas each year. Or getting in too deep on certain projects.
Which might explain why most people who have been in the trades for a while tend to compensate by developing a rough persona for new clients and jobs outside the norm or equally disturbing, doing drugs. It's a dirty secret in the industry, but with my uncle's death a few months ago I'm finally realized that maybe's there's a left-over legacy from the 1980s New York cocaine fests, a secret that my family hid for decades that needs some opening of the air. An East Coast or maybe New York legacy. Our grandfather's generation who started shops, some had them run into ground by their son's drug habits. Drug users are funny, charming, and they will take every dime they and everyone around them has to feed their habit. I know, I grew up with this uncle. I watched my family to struggle to deal with him. Drug addicts will get better and worse. But at their core, the only thing they care about is how they feel, and cocaine, liquor, you name it....there's a drug out there that will make you feel anything you want to feel whenever you want it.
Which comes to the purpose of today's post, one of the hardest lessons if you don't intend to drown yourself in drugs or bitterness is an ability to say no and mean it. And you have to say it to yourself first which can be the hardest of all.
That ability to say no to the wrong things has to be balanced against learning to say yes to the right ones. And the wisdom to know the difference. That last part is the hardest for me and I don't always do it right the first time, or the third. Robert Frost or Randy Pausch may give you the mechanics, but it's up to you to acquire the wisdom to apply the knowledge. And that in the business is something all of us struggle with. So today, to roads both taken and not taken. What have you not yet had the courage to say no to? Or made the time to say yes to something important? 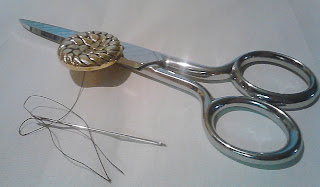 Hey guys, welcome back from a great Easter weekend. As promised, the first of our tutorials, professionally sewing on buttons by hand. This is actually an old French tailor technique, but still a goodie so I'm passing along because it's so easy and quick to do that you can do button repairs in a minute or two without fancy equipment or breaking the bank. And your buttons will look perfect and hold up in the wash! Thank you so much for being our customer and we hope this helps you save money around the house. We so appreciate you!